Barefoot in the Snow 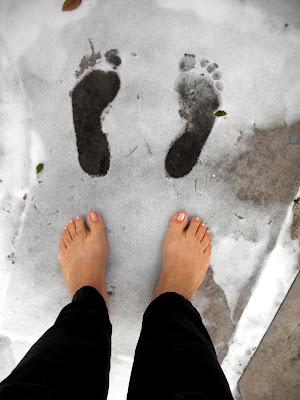 It happened overnight.  We had our first light dusting of snow for the season.

This happy barefoot runner did not feel as happy about the first snow as she usually does.  In fact, she looked out the window with a bit of dismay.

Maybe it will be gone by tomorrow, when my next run is scheduled.

I wonder what it would feel like to just step out there and see what it feels like?  I mean, it won't hurt me to go outside, take a picture of my feet on the snow, will it now?  A minute or two wouldn't hurt, would it?  I definitely am not going go barefoot running in the snow this year, but, well .... it's only a light dusting of snow and it looks like very dry snow.

Yeah, but as soon as my feet touch the snow it won't be dry.  It will melt and it will be wet and freezing. 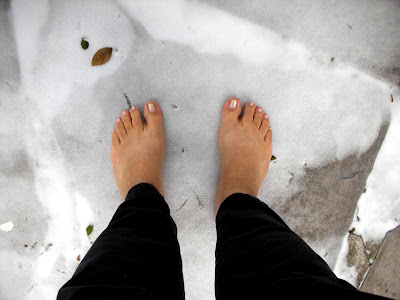 I admit it was hard to take of my socks and Terra Plana Vivo Barefoot Kali shoes that were keeping my feet relatively warm.  But once the decision had been made, then I just saw it through.

Amazing!  It was not miserable. It actually felt pretty good!

I could definitely feel that the cold-weather conditioning I've been doing over the past couple of weeks had produced an insulating kind of effect.  I felt definitely like my feet were prepped or ready for this and that it did not feel as cold and freezing as it might have had I not accustomed my feet to the cold. The strong, tough skin on the soles of my feet which had developed over the past 145 miles of barefoot running almost felt like a layer of protection, almost like a kind of "shoe" on my foot.

I'm not saying it wasn't cold, but it was surprisingly more comfortable than I thought it would be.

But I have no idea what it would be like to remain out there.  I was only out there for about 3 or 4 minutes.  I wonder how long I would be out there before my feet started to freeze.

But then I thought that maybe they wouldn't freeze because I'd be running and the activity would keep the feet warm.  There really would be no way of knowing for sure until one gave it a try, would there now?

Maybe by taking these little steps out I've already begun?

Posted by Avocational Singer at 6:23 AM

I would think the snow would feel different than the road. I seem to have not acclimated to cold ground as my feet get numb.

Mama, I wouldn't be surprise if there are individual physiological differences between people that make it more or less possible for some or others. Just like some people can eat certain foods that others can't, and some people need 7 hours sleep and some 9. There's probably a factor of taking heat and cold tolerance that varies from individual to individual.

Sometimes that's what I think barefoot running is really all about -- finding out about what your personal running machine is all about. There is no one-size-fits-all mode.

I'm delighted to find out what's possible for me as I experiment. Maybe it's because I'm part Lithuanian and it gets cold up there in the north. Maybe I have a gene that can take the cold or something.

Its funny. I've been going through much the same thoughts and reactions as you. Last winter I didn't really try to run barefoot even though I had started during the previous summer. But this year I'm almost daring myself to keep going as long as possible. So far so good.

Keep up the running and writing!!

Well, Bob, we're probably having a similar experience because of the amazing weather we've been having. I think that our beautiful warm November tricked us into thinking that the barefoot running season lasts much longer than it really does and we're having problems with denial that the cold is finally coming.

I'm a little envious. You're doing great! Your caution and patience are what will make you continue to learn at a rapid pace.

Great post! I started reading it, and got about half-way through it when I couldn't read any more--I HAD to get out and run. So I ran a kilometer on the cold, but snow-free streets in my neighborhood.

No, I wasn't barefoot. I ran in a pair of moccasins, to see if they'd be practical for "barefoot-style" running during the cold months that coming up. And it worked great!

We haven't had any snow yet, here where I am (just northwest of Boston.) But when we get our first snowfall, I will do my best to follow your example.

Thanks for getting me out of my chair and out onto the road!

P.S. When I got back from my run, I read the rest of your post. Loved it!