A Barefoot Run in the Rain 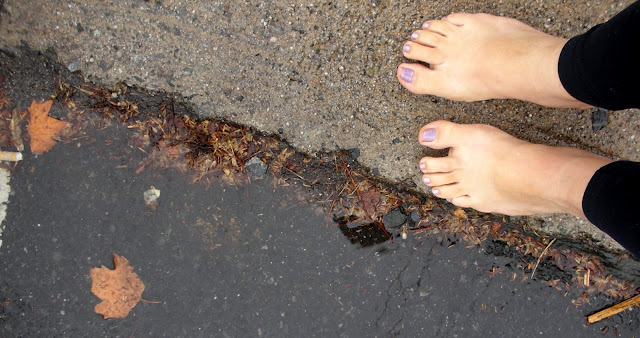 I opened the door to go out for my run, Daffodil on her leash, all excited.

Shoot, why hadn't I known it was raining?  I had seen how grey it was outside my window, but had been so busy all morning that I didn't know it was raining.

It's supposed to be bad to run barefoot in the rain -- Blisters.  I usually avoid it, and I can, because since my running schedule is simple, with breaks in between, and since I don't train for marathons or anything like that, I can just skip it if it's raining.

Today, though I was all ready and I wanted to run.  And I am in training.  Training for my black sash progress stripe and this is part of it.  So, I decided to just go ahead and run barefoot in the rain.  After all, I was only going a mile.  And maybe I could be really really careful and pick my feet up so they don't rub on the ground and make blisters ...

Okay, Daffodil, you don't have to come. 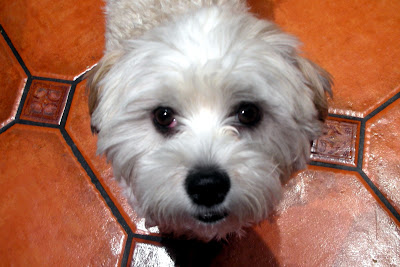 It wasn't really very cold, so that was good.  We've been having an extraordinarily mild winter. I haven't had to wear shoes out there at all, in both January and February.

Oh, I know!  It's probably because I bought those Merrell pace gloves to use in the cold. Now we will not have cold weather any more.

I usually don't care what people think about my being barefoot out there -- or what I think they think, because I never know what they think.  But today I felt a little self-conscious.  It seemed a bit odd to be out there in the rain.  I really thought that people would think I was a little crazy. 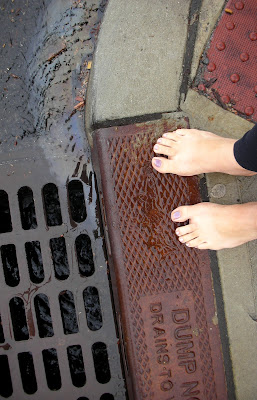 Why didn't I think people would think I was crazy when I was walking through the snow drifts last winter?  Well, snow drifts kind of hide your feet.  No one driving by really sees you behind all those mounds of snow.  And I was only doing small sections of snow at that time.  And, well, I don't know why I didn't feel self-conscious about it.  I guess because it was too over-the-top.  It was so over-the-top that it just seemed like some kind of experiment and nothing weird. Being out there looking almost normal, except for shoes, seemed to be more weird.  I imagined someone thinking, "Okay, I've heard about barefoot running, but in the rain?"

Needless to say, you all know I had a wonderful time.  The bottoms of my feet got a little numb, and my shins and calves felt a little stiff.

I think they may have been stiff because I didn't do my 1/4 mile walk warm-up first.  I felt even more self-conscious walking barefoot so I started running as if to say, "See, I'm out here for a barefoot run."  Walking around seemed odder than running, for some reason.

So, I ran along, being extra careful with my form.  The outer left side of my foot did not feel painful.  I tried to be aware of what I was doing.

However, at one point, I put my camera on the ground, set the timer, and started running towards it and captured this photo: 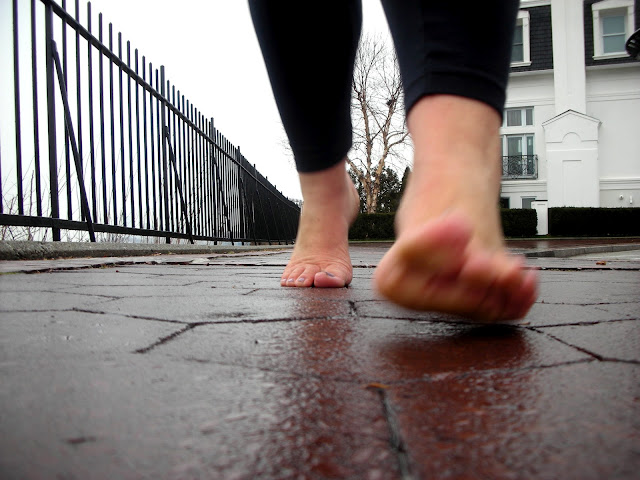 Now, it's not really fair to evaluate my form based on this photo because as I was running towards the camera, which I had set for 10 seconds, it was not firing and I was worried that I would run past it before the picture was taken, so I started running slower and taking baby steps so I would get the photo.  In other words, I altered my gait a bit.

Yet I find it interesting that it looks like that left foot, the one in front, is about to land on the outside.  Remember I told you in my other post that peroneal tendonitis can be caused by landing on the side of the foot?  Hmmmm!

I don't think I was doing that all along, but with running it's hard to tell what one is doing.  It goes by so fast (even a slow runner like me).

Now that the run was over, it was time to check out the bottoms of the feet.  Back to the self-timer on the camera: 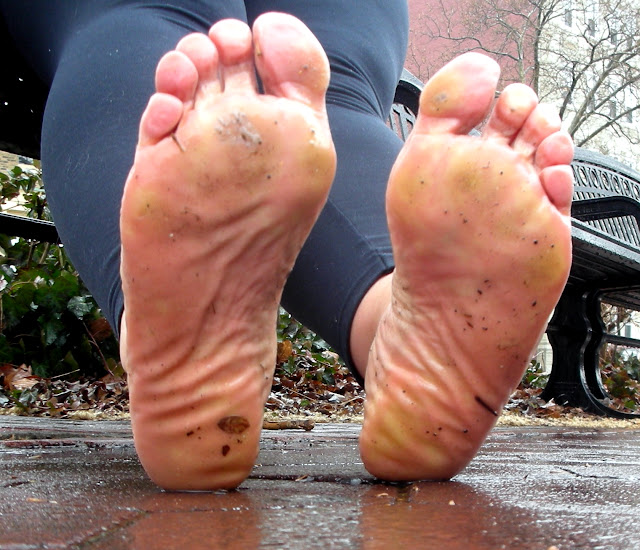 A bit wrinkly, but things look okay. Looks like I didn't do any damage.  Lots of stuff sticks to the feet in the rain.  I have noticed, however, that my feet do not get as dirty as they used to when I run barefoot outside.  The leathery, thickened skin seems to almost slough off dirt, and things like splinters and little stones don't seem to manage to work their way in any more.  That's very cool.  Another reason I don't want to put shoes on.  It took quite a while to make those great soles and I would hate to lose them and have to start all over again.

Once I got them cleaned up at home I made another inspection of the bottoms:

I saw that a blister-like area of skin had been roughed up a bit on the sole of my right foot and another similar small spot on the big toe of my left foot.

I think these were leftover blisters or callouses from a long long time ago that have just been there but not obvious, kind of flattened up against the skin.  The wet rain and pavement acted like a kind of pumice-stone action to kind of work on those little spots.  It's just old dead skin that needs to come off, but I have not wanted to pumice the bottoms of my feet for fear of reducing the protective layers.  Guess nature decided to take care of it.  Maybe we are supposed to run in the rain.
Posted by Avocational Singer at 3:30 PM

I love love love running in the rain! I have never heard about blisters in the rain,maybe because we have summer rain here and it is never really cold.
Great idea to take pics of your feet running - I wanna try that too.

Staci, I'm with you on running in the rain now. I love it!

I wasn't sure where I had heard the idea about getting blisters running in the rain so I decided just after reading your comment to go back and look through some barefoot running books I had read when I first started. In one book, Jason Robillard's The Barefoot Running Book, I found this: "Rain is usually not an issue unless you are exposed to it for a long period of time. After a few hours, wet skin tends to become macerated, which greatly increases the likelihood of blistering."

I read that book over a year-and-a-half ago, and I think I must have been remembering that passage when I was hesitant to go out in the rain yesterday. But I also must have vaguely remembered that it took a long time for the feet to get that soaked, and figured that my little run would not be a problem. What I had not remembered was that the "long period of time" was "a few hours." Lol -- At the rate I'm going, I think it will be a long period of time before I am out there for a few hours in the rain and have to worry about macerated feet.

Where....oh where have you been?

I've successfully avoided injury this year and have been pleased to run many races barefoot...and many quiet solo runs bf as well. But the road tells me it is MISSING Barefoot Fresca!

Hope you've been well and (hard as this is for my mind to conceive) enjoying some OTHER activity this spring.

Perhaps you are running but not blogging. In that case...may every step you run be filled with Joy.

(And if you're not running now, my wish is that you're enjoying something EVEN BETTER than running bf! :)

Dear Ken of RunWith, I was very happy to see your comment. I am here, and I am still barefoot running, and I have tales to tell and photos to post. There isn't a day when I don't think that I must get back to my poor neglected blog. I HAVE been doing fun other things along with barefoot running, so there has been less time to blog. You have encouraged me to continue my story. Stay tuned. (I've been admiring your photos of swimmers on FB, btw. Nice stuff!)

You are the reason I am going to try minimal/barefoot running, even though I do carry around a "little" excess weight.
Truly inspirational:-)