It’s hard to recall how miserable it was yesterday all day when we’re having as beautiful day as we’re having today.  But I will try to look at my photos and go back in time and remember how it felt to step out on to cold rainy pavements with my little bare tootsies.

All summer long I have been worrying about how barefoot running will be when the weather changes. I have wondered if I would be a fair-weather barefooter, which might be okay.  But I have also wondered if I’d be willing to give some less than optimal conditions a try.

Well, some of my answer came when we had really bad storm conditions this week.  I just didn’t want to stop going out barefoot, so I had to step outside and give it a try. 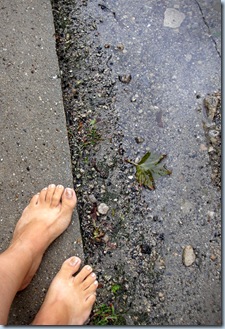 I was surprised at how cold the cement is when saturated with wet rain water.  I have been spoiled by the luxurious warmth of the summer.  I’m not someone who likes the cold, so the first steps out were not to my liking at all.

But in a little while, you get used to it.

You would think after really heavy rain and winds that the sidewalks would be cleaner, and in some ways they are – all the icky spit and dog poo and other stuff is rinsed away, but there is tons of debris left behind after a storm, and all that debris means bare feet have to be more careful.

Here’s some photos to show what I mean: 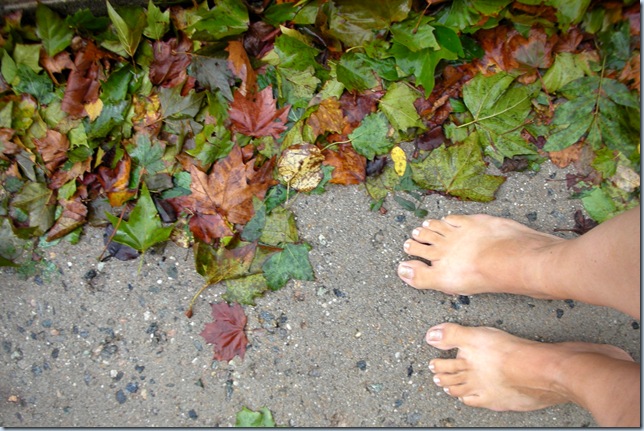 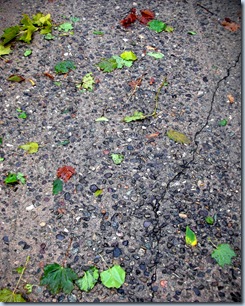 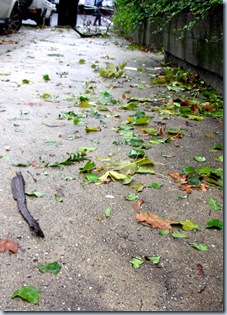 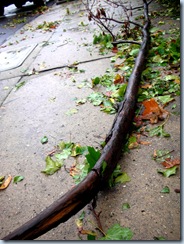 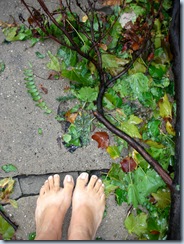 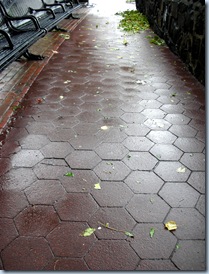 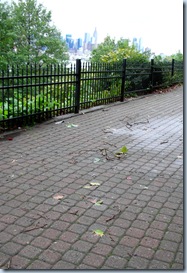 You see what I mean?  Danger everywhere! 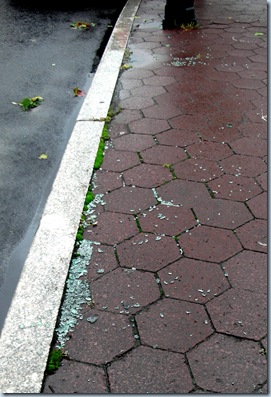 I did remember it was there on the way back the first time, but I had to pass it again due to my having added an extra out-and-back at the end, and I forgot about it until it was right upon me the second time.

The wind was blowing so strongly, that the ground began to dry a little while I was out there: 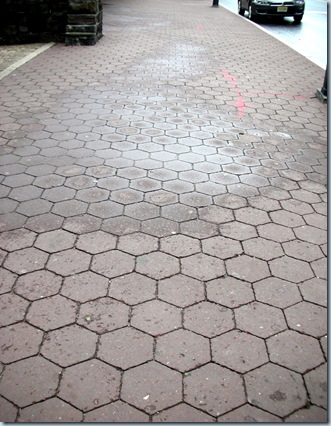 When you have a choice like this, take the high road and keep your feet as dry as you can because you have a bit further to go and dry is better when barefoot running is concerned. 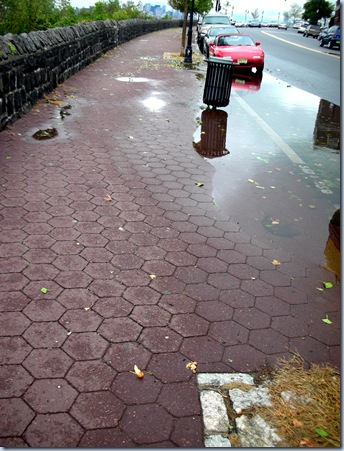 My Response: A friendly “hello”

Girl Runner:  “I love your barefoot!”

Man Runner when we passed again on the way back:  “I love it!”

My Response:  A smile

Me: “So they tell me!” good naturedly and with a smile.

I added a half a mile to my 5K to run 3.75 miles.  I could feel the exact addition of the extra distance.  Right when I got to the 5K point, my legs started to feel heavier and I knew I was running extra.  I add my extra distance to the middle of a run usually, so that psychologically I’m finishing the same way I always do.  But my legs knew that they were having to go extra. It was good though – right – it wasn’t too much or too little.  It seemed just right.

The next day I do have some kind of weird issue on the ball of my right foot in the first metatarsal area.  When the edge of the ball of the foot presses into the ground at various moments, there is a sharp pain – like a sharp pinprick.  I had my DH look at it and there is a tiny red spot around the place where the pain happens.  He said it looks like a teeny blood blister.  But I think it looks like a little teeny tiny embedded stone.

I have two other blood blisters under the skin which do not hurt at all.  One of them is on the left big toe, and I think it happened during the other wet run earlier this week.  The other one is in a weird spot beneath my second toe.  It doesn’t hurt and has been there a couple of weeks.

DH says that the blood blisters go away very slowly, but that it’s okay to run on them in the meantime.  He said it might take six months for them to go away.  I don’t like them because I have loved lifting up and showing people who ask how great my feet look, but the blood blisters make it look like barefoot running is not good for you.

Oh, all right!  I guess I have to show  a picture of the blood blisters and the ball of my foot. 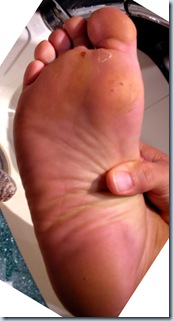 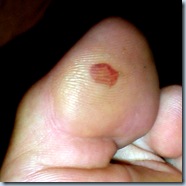 On the right foot, there is a blood blister below the second toe.  Next to that is the remnants of peeled skin of a blister from the Chris McDougall run. You can see two specs on the ball of my foot.  The lower spec is about were I’m feeling the pinprick pain.  The upper speck is sliver-like and I think it may be a splinter but it has been there a while and not been bothering me.

On the left toe is a blood blister. I am certain that was caused by running on asphalt with wet feet earlier this week.  I wrote about it here. The yellowish area is callous. That callous was there before I started running.

I do feel a bit of concern about these bottom-of-feet blemishes.  I think the two dots on the ball of my right foot may be a little stone and a sliver that got embedded.  If this happens after every run, or often, it will be a very good reason to go back to some kind of shoe because it is a big pain to have to operate on one’s feet often. I don’t mind once in a while.  But often is another story. A couple of weeks ago, DH removed a splinter from my big toe.  I spared you all and did not write about that at the time.

Come to think of it, I did not have any problem with splinters or anything else all during the beautiful weather this past summer. Maybe this issue of small-embedded-objects is a new issue because of the Fall weather and the debris on the ground.  There were definitely a LOT more little teeny-sized pebbles in the way that were very annoying.

We shall just have to proceed on to find out.

Posted by Avocational Singer at 3:58 PM

hi how long did it take for ur blood blisters to heal? did u pop them or let them heal on their own? thanks like your blog!

Hi, Ed, thanks for your question!

Wow, this was a couple of years ago. I have been barefoot running for a few years now and haven't gotten any other blood blisters since that one.

It's a little hard to remember, but I think it took about a month or longer for the little blood blister to go away. I never popped it, just kind of ignored it. It wasn't a very big one and it was kind of deep under the skin so it wasn't accessible enough to pop really, like one more on the surface would have been.

At the time I wrote that post, I still new to barefoot running and I was analyzing every little blister pretty closely. Now I get stuff on the bottom of my feet and don't even realize it for days, lol!