Wow!  What a difference from the last class!

The first black sash class felt like a disaster; a catastrophe.  It wasn't really a disaster or catastrophe.  It could be viewed as such from one point of view.  If the definition of disaster/catastrophe was almost passing out and not making class, then from that angle, one could say it was a disaster.  However, if it is looked at under a realistic and objective lens, it just simply was.  A person who allowed themselves to become de-conditioned and accumulate extra pounds was only going to have the results I did.  In fact, an argument could be made that I did better than could have been expected.

Anyway, I set down to make a plan to determine how I was going to deal with it all.

I figured there was no way I could work out on my own at the level of intensity that we had in class.  Doing that might even injure me.

Decided to use the week to play catch-up.  I would scale everything way way back and start from there.

So, I planned my "getting back into it" workouts for the week.  They were very light.  I just wanted to get the muscles moving and inform them that they were going to be needed again and these were the types of things I was going to be doing.  I modified everything.  My idea is to just survive the very intense Saturday morning cycle classes the best I can, and in the meantime, play catch-up during the week.

I'm tempted to say that I shouldn't be in the black sash class at all, but my Sifu disagrees with that so I'll have to proceed with my plan.

Here was the week: 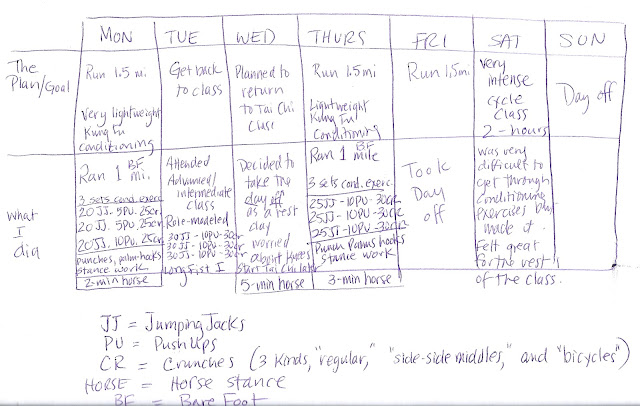 My baby workouts during the week were effective!  I made it through the entire class on Saturday, and even felt a bit of my old strength popping through.  Still had a tough time during the conditioning sets at the beginning of the class.

Also, we had to do "battle line" kicks.  That's hopping across the floor on one leg while continuously kicking with the other -- oh, and if someone puts the other leg, the kicking one, down, we all have to begin again until we all get across the floor successfully.  I had a hard time last year doing these battle-line kicks.  It seemed impossible to me to hop across the floor like that.  I was a person who caused us all to have to go back to the beginning again quite a few times.  But my classmates -- er, my Kung Fu family, that is -- cheered me on and in the end I mastered it.

Well, this year, I was hesitant to try the battle-line kicks with all this extra weight I'd put on.  It was a double-whammy in that I was out of condition and had the extra weight.  Had I been doing the drill all along, while gaining the weight, my strength would have come along with it, but having stopped and put on the weight while stopped, I was afraid to try it.  That's a lot of weight to hop around on.

So, before class, I got permission to sit out that drill.

However, when the time came, I assessed how things were going and I was feeling so good that I just knew I could attempt it.  It was tough, but I was fine.

Body is definitely remembering that it knows how to do this stuff.   This is good!

I can't wait to experience what this next week brings!


Posted by Avocational Singer at 12:26 PM

Glad to see you're back at it!

Just enjoy doing what you're doing, and you'll be in better condition in no time. I predict the Mother's Day 5k will be a breeze.