Training for Today (Commentary below): 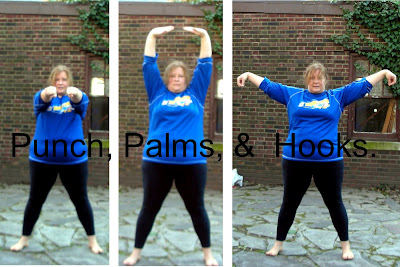 Reading someone else's workout can be pretty boring.  It might be as boring as reading what someone ate all day, or when they slept or when they vacuumed.  However I have put it here anyway.

Here are further notes, which may or may not be a tad more interesting, depending on one's frame of reference.

Running
That stuff The Dog Whisperer says about dogs needing exercise to be calm nice human beings is really true.  When I stopped running for six weeks, Daffodil wasn't getting her runs in and she turned into hyper-dog.  We'd all be sitting around trying to watch the news and she was all revved up in the evening barking and barking and asking us to come throw her pet squeaky skunk 500 times.  She was driving us crazy.

Just one week of me getting back to our old routine was like MAGIC.  She is the calm, mature, peaceful pup we have all come to love.  I almost have a moral obligation not to stop taking her out there.

We do have her go out with "the pack" in town a couple of times a week.  But she needs me to take her the other days.  I'm really the only one who's going to do it. 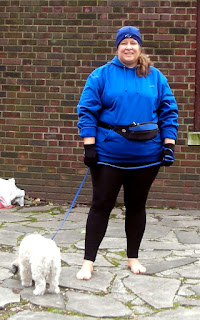 Issue with my left foot:  I'm too tired to find out exactly what's wrong with my foot, so I'll just try to describe it.

Oh, shucks, okay, I will go out there on and Google foot anatomy so I can try to be accurate.  Just wait a sec ...
----------------------------------
Okay, I'm back.  It's hard to know what part of my foot is giving trouble, whether it is a muscle, tendon, or even a bone.  I strained something during the Disney race (haven't written about that yet) and was very concerned about it, although the face that it got better and better made me hope that it wasn't something serious.

The area affected is somewhere around the extensor digitorum brevis muscle, OR, if it's a tendon, it might be one of the peroneus tendons, brevis or tetius, OR it could be something going on with the 5th metatarsal bone. (based on a brief examination of this illustration:  http://www.podiatrychannel.com/pod/Images/ft_sdvw.gif)  The more I study the illustration, the more I think it's something to do with the 5th metatarsal bone.

It hurts on that side part of the foot, and there is a corresponding burning feeling on the top of that outer part of the foot.  My doctor-husband says that the fact there is a burning feeling on top means there might be some kind of nerve encroachment.  The only way to find out what's going on would be to X-Ray it.  Since it's getting better and better with each passing day, I figured I would just wait and see.

So, it was getting better and better and better.  Running last week did not bother it.  But after cycle training class on Saturday, I felt it acting up and was a tad worried.  A couple of hours after cycle class, it was much better, so I chalked it up to one of those temporary kind of strains.  I was glad that I would have my rest day Sunday, figuring the rest would take care of it.

But this morning when I stepped out and began to run, it started to complain to me after about a 1/4 mile.  I felt the burning sensation.  I had to ask myself if that meant I should stop.  I did not want to stop.  After all, I'm in training and I was on a mission.  But I believe in being humble and wise, so if  I needed to stop I should do that.  On the other hand, I was only running a mile.  Surely a mile would not cause too much trouble.  I decided to continue on.

I concentrated on relaxing my feet as I ran along.  It turns out that the little warning pain went away.  The first part of the run was on an incline.  I'm wondering if the incline was stressing it more, and once it leveled out everything was okay?  Or was it because I was focusing on relaxing the muscles in the feet and lower leg?  Hard to say, but it seems to be okay that I ran the mile.  Me very happy! Don't want a set-back right now.


Conditioning Exercises
Since the beginning of my Kung Fu training over four years ago, the conditioning exercises we do at the outset of each training session have been my nemesis.  Although I saw progress over the years, and increased my number of reps and learned to engage the muscles involved more fully and deeply, they have always been the hardest part of my Kung Fu training.  I've had to stop and rest and do my own little mini sets-within-sets of them.  I have had a really hard time doing the bicycles.  At my best over the years, I was hitting three classes a week and doing the conditioning workout three times a week, and doing them at home on my own if I missed a class.  At my worst, I was doing them once a week in class.

This year, I am tired of feeling defeated by these conditioning exercises.  I have had the thought that twice a week is no good for them.  In the past I've been hesitant to do them every day because it seems like the muscles need to rest in between.  But my progress at 2 or 3 times a week has been very slow, so maybe I need to do them more often?

I've been trying to find out info on the internet about how often one should do push-ups and crunches.  There seems to be a lot of different advice out there.  Some emphasizing quality over quantity.  Some advocating every day, some advocating anywhere from once a week to a few times a week. Some say it depends on your body.  Some say abs recover quickly, others say, no, they are just like biceps and need rest to regrow.

I'm going to go with 4x a week.  Twice in class and 2x on my own.  The ones I do on my own are going to be less in quantity than in class, but I'm going to focus on quality.  We'll see if I make progress that way.

Actually, in only one week I've made progress.  Body is springing back and remembering.  Seems like this is going to come back faster than I expected.

Long Fist II
I knew this!  I really did.  I worked so hard on it last year.  But when the time came for us to do it all together in class last Saturday, I could not keep up with the class.  I had not reviewed it and fumbled.

If you want to see Long Fist II, check out the video on this link:  http://www.youtube.com/watch?v=XsZO_JwX2GE&context=C32257cdADOEgsToPDskLNCqw_5uBFNj6AnWFJ7edi
I do it much slower than that, but that's what I'm aiming for.

Last year I went through this black sash training and passed the test, but if I were to grade myself, I would give myself about a C+.  I could have started training seriously earlier, but kept putting it off until I had only about 5 weeks left.  Therefore the whole thing was harder than it needed to be for me until the last 5 weeks.  But that was really cutting it close, and I always knew that if I had been training all along it would have gone much better.  This year I'm aiming to pass the test and get my progress stripe with a better grade.  I'm actually aiming for an A+.  I feel that an A+ reflects the black sash ideal better.

Looks like I'm off to a good start.
Posted by Avocational Singer at 10:42 AM

I had that side-of-foot pain a couple of years ago. At least, it sounds like the same thing. I remember being a little concerned, then something else started hurting and I forgot about it. Then it went away. (So did the other thing, whatever it was.)

BarefootJosh, I have been through SO much since I wrote about that side-of-foot pain, including an X-Ray today because my doc-hubby had to rule out Jones fracture!! (google it -- scary!!) I'm going to write a big boring post about it all. Some parts of the post will be boring and some will be kind of interesting and barefoot-y,but maybe by the time I'm done writing about it I'll be healed!