Today's plan was to run.  Run barefoot, of course.

But I got called to sing a funeral in the morning, so was planning to run when I came home from that, a little worried that the pavement would be hot.

But as I was getting ready to go sing I got the horrible aura of a migraine -- shimmery jagged lights in my vision.  My DH, who happened to be home, gave me an osteopathic adjustment to my neck, which often keeps the headache from coming.  I got through the funeral and never got the headache, but still felt pretty crummy and had to lay down for several hours.

I only get these dumb migraines about four times a year but I was upset that it spoiled my training plan for the week.

So, I had to force myself to go out and run in the evening.

I felt really out of it because of the migraine, and I really did not want to go out there.  But I kept thinking of that test on Friday -- a three hour test of endurance that I'm not even sure I'll be able to pass.  I knew that this run was important to get in to at least help maintain my aerobic conditioning.

So, I tricked myself.  I told myself that I was only going out for a walk.

In all that, weaving in and out of the people with my little dog, not one person seemed to notice or even blink an eye about the fact that I was out there running barefoot.  In that way I enjoyed it tremendously because we were all just out there doing our thing, whatever it happened to be.  I have a friend who gets hostile comments in the urban neighborhood where he runs, so I feel very blessed to have this place here.

On the way back, I was blessed also with being able to see the most beautiful sky.  Unfortunately I didn't have my camera or phone with me to take a picture for you all, so I'll use one I took from a couple of nights ago.  Stay tuned with me all week as I go through the final workouts before my black sash test on Friday!! 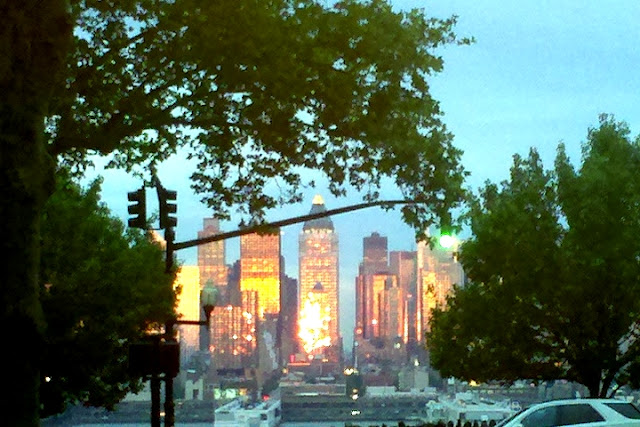 Posted by Avocational Singer at 7:06 PM