Ummm … That should read my Love/Hate Affair. 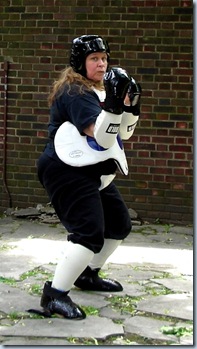 From the moment we got this sparring gear, I had an aversion to it.  In fact, I had such an aversion to it that I would often “forget” to bring my gear to class, and while everyone else was practicing sparring, I would be over with the group that forgot their gear and just practicing forms, which I liked better.

No one really looks that great in their sparring gear, but some of the younger girls can look a little cute in theirs.  I am not one to worry too much how I look.  I don’t let that concern stop me from going out and doing stuff, but I have to admit that the sparring gear was a little too much.  I thought it made me look a lot like Kung Fu Panda.

But really, the aversion to the sparring gear for me was almost as strong as my aversion to sparring.  I mean, I had joined Kung Fu because my daughter had wanted to do it and my friend and her daughter were doing it and I thought it would be a good way to get some exercise.  I looked at all those Kung Fu forms and thought, “They’re kind of pretty – like dance.  I can go for that!”

About two years into Kung Fu the realization came.  “Oh my gosh, I’m learning to fight!”  I have to tell you that it was the farthest thing from my mind when I had joined – learning to fight.

Needless to say I feared it and did not like it one bit.  Fighting seemed as far off my radar as something could possibly be.  I don’t like violence at all.  I never go to any movies that come anywhere near being violent (Kung Fu Panda being an exception, and also the Lord of the Rings Trilogy).

When Sifu called me in last January to invite me to black sash training, he told us that he would not invite us if he didn’t think we could do it.  He asked if I had any concerns.  I told him it was the sparring.  “What could we do to help you with that?”  I told him that if I had some technique and strategy I would feel more confident.  “Just show me what to do," I said.

All that time I had “forgot” my sparring gear, I had missed out on some training and I was behind.  I have been trying to catch up the past 6 months.

I don’t think I’ve ever participated in a physical activity that is as intense as this sparring.  My little barefoot 16-minute miles just don’t cut it compared to this level of intensity.  It is during the sparring that my lips have turned blue two times. 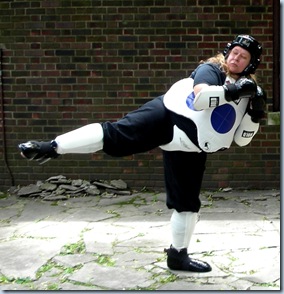 There are a lot of already black belts in our class that are training to get their second and third degrees.  Some of them are teenagers who are strong and fast and have been training a lot longer than I have.  It has nothing less than comical as I’ve gone up against some of them.  They just set themselves up on one leg and just start kicking and kicking me like I’m some kind of punching bag.

I have been thinking a lot about strategy and about myself.  I cannot make myself a more advanced person than I am right now.  I have a repertoire of a few moves that I can use, much fewer than the fancy spin kicks and arsenal that some of those girls have.  I’m not speedy, but I do have my brain.

I decided I needed a bit more practice, so a couple of days ago, I attended the sparring class that was just after my regular Kung Fu class.  I didn’t know how I was going to do it because just getting through one 45 minute workout is enough for me.  But I did stay and I learned just a little bit more, and I built my stamina just a little bit more.

So, this morning, I was very calm and I started to do well.  Keeping a cool head helped me.  When the kicks came, I just pushed them out of the way.  I controlled my space and kept far enough away so that I couldn’t be used as a punching bag.  I planned my moves in advance and watched carefully what the other person was doing.  I didn’t swing or kick randomly or wildly, but waited patiently for the opportunity.

And I did much better. 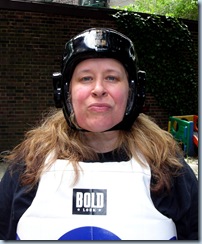 (the dumb mouthpiece that makes us all look like goons)

Posted by Avocational Singer at 10:06 AM

When I would spar in the boxing gym, I instinctively complimented my opponent every time they hit me.

Trying to picture the complimenting, BFJosh. Like "Nice one!" and "Good kick, you got there!" "Ooh, you got me!"