The 23rd Mile -- A Change of Scenery, Pictorial Essay

This post is going to have a lot of pictures!

The other day while on an errand in another town, the path by the river beckoned me to come over and run.
I could have, because I already had my running clothes on, and all I needed was my bare feet, but I hadn't eaten anything yet that morning, and I also always have to take the dog along and she wasn't with me.

So, I made a plan that today I would do it.

Here's the path and surface that lay before us:


As usual, I set off to walk a 1/2 mile as a warm up first.  This is good for Daffodil, my dog, who was extra excited because we had rode over in the car and come to a new place.  It gives her a chance to do her business a couple of times and sniff things out. It also gets me used to carrying my flip flops tucked in my waist pack, and  gets me used to juggling the things in my waist pack -- the camera, the cell phone, the doggie bags and paper towels -- so that I won't be distracted by them later when I start running. 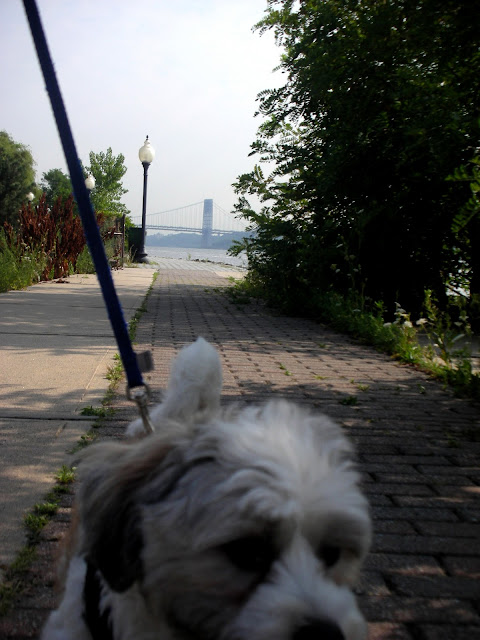 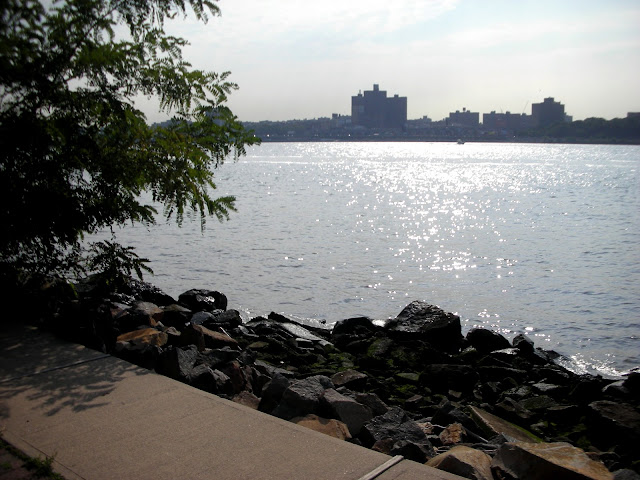 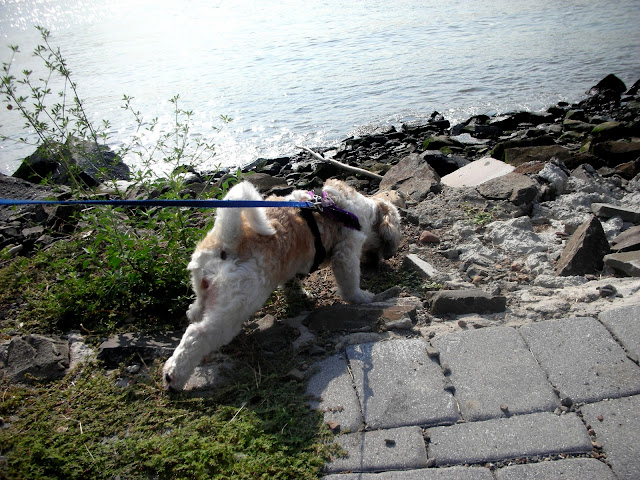 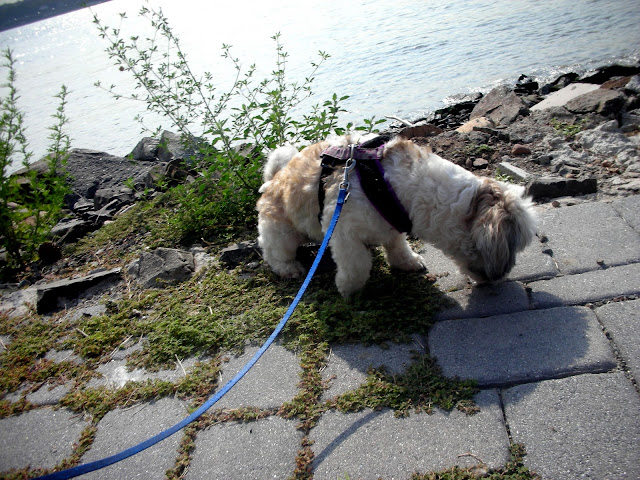 One thing I had noticed while walking these paths in shoes at other times, is the great amount of goose poop on the path caused by these guys: 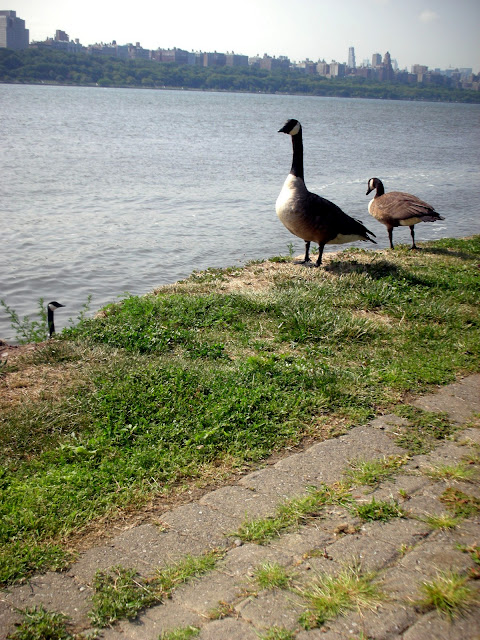 However, for some reason, there was not too much today, and what little was there was very easy to dodge around.

The surface of the ground changed as I went along, and my feet, of course, always noticed. 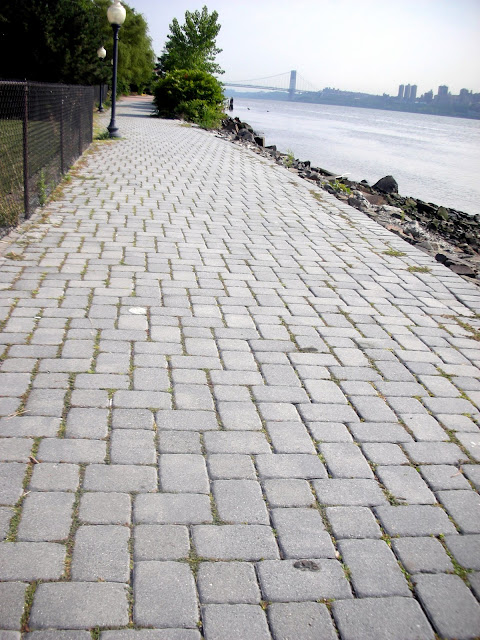 These bluish ones here were nice and smooth. 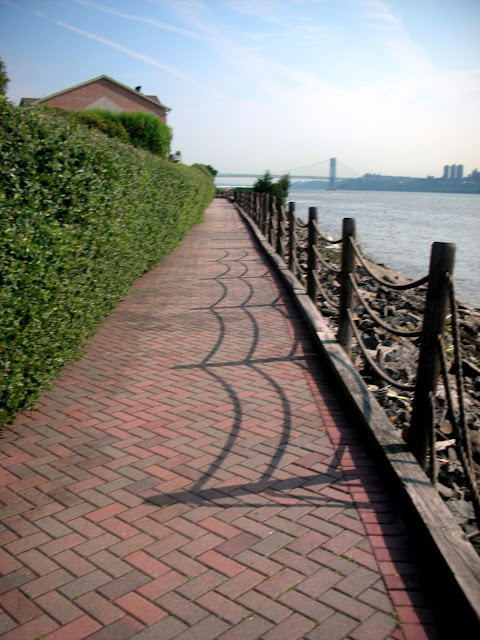 These red ones were set on an angle, and my feet liked that because they never hit the edges of the pavers, which is what tends to get the bones. 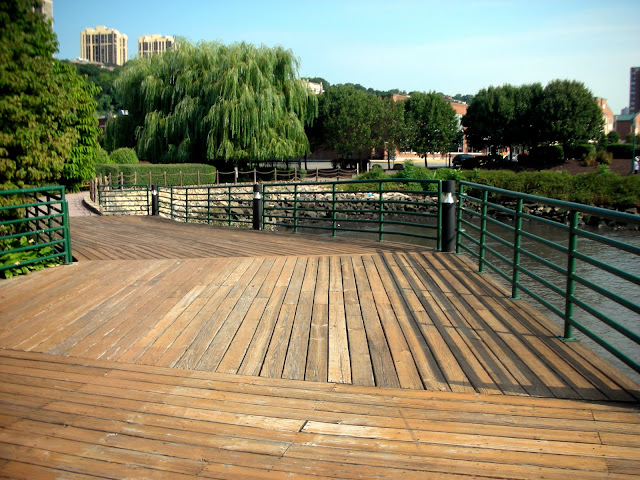 This was my first time running on wood planks.  They were nice and smooth, but I worried about splinters (a new worry). I was really careful here.  There were also nails sticking up from where the boards were seamed.  But it actually felt really nice to run on wood. It was soft. 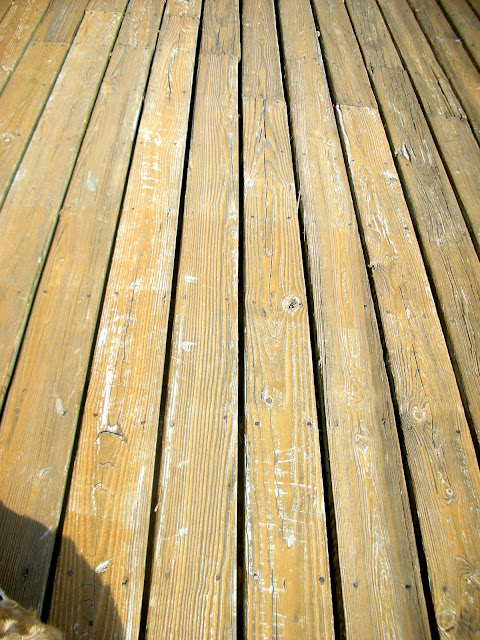 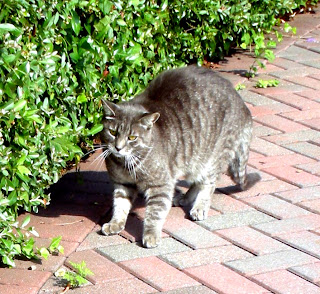 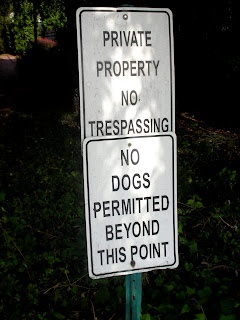 And this looked a little forbidding, but I didn't want to go in there anyway. 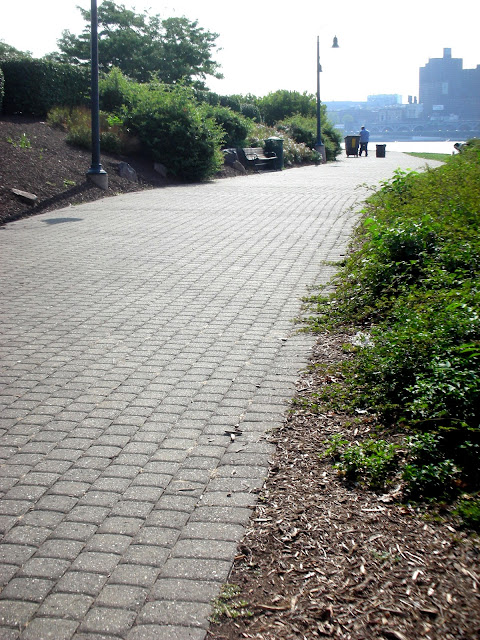 See the guy at the end of the path picking up trash (or maybe even the goose poop)?  When I got up there, I asked him to take a picture.  At first he didn't understand, but when I spoke to him in Spanish then he did.  He was really happy that I spoke to him in Spanish and asked me if I was "Americano." I explained that I had studied Spanish in school and that I try to practice when I can. 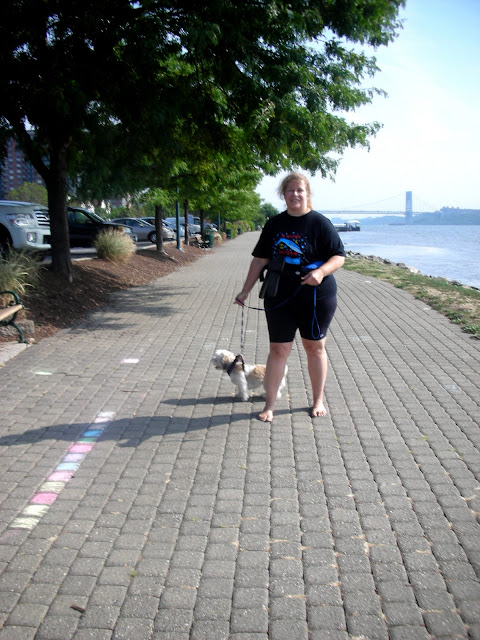 .
I thought I had not run far enough, and was about to turn around and do another out-and-back at least part of the way, when Daffodil ran over to some shade and just lay down.  "I guess that's it," I thought, and brought her back to the car for some water.  Later, when I got home, I found out that I DID go far enough -- 1.4 miles running after the 1/2 mile walk.  So, it was good. 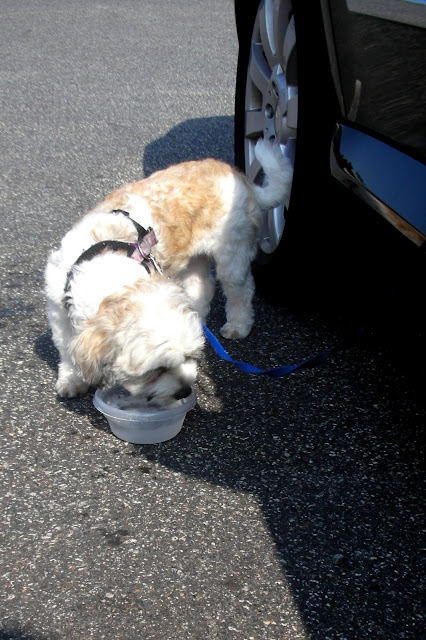 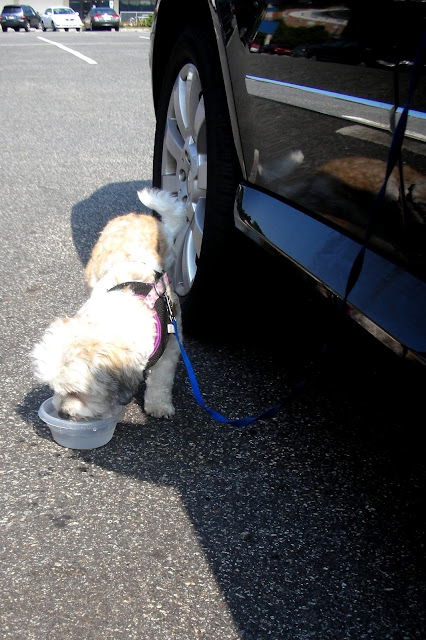 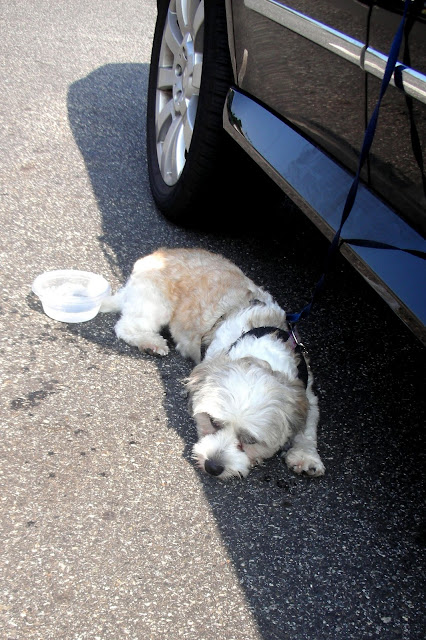 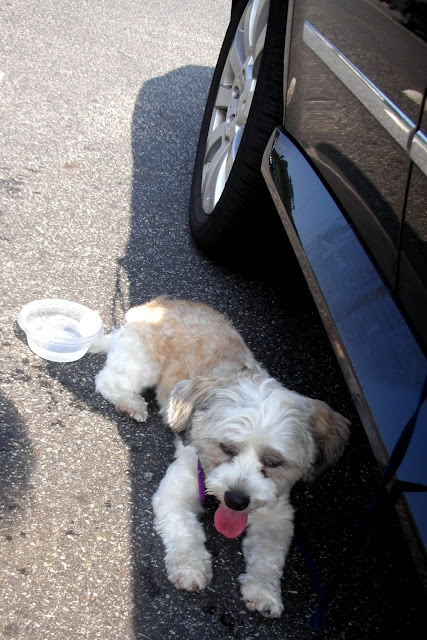 I was about to get in the car and drive home, when I noticed that one of my flip flops, which had been distracting me the whole way, had fallen out. I didn't exactly want to drive in bare feet, so, Daffy and I had to go back out and find the flip flop. Fortunately, it was only several yards back on the path: 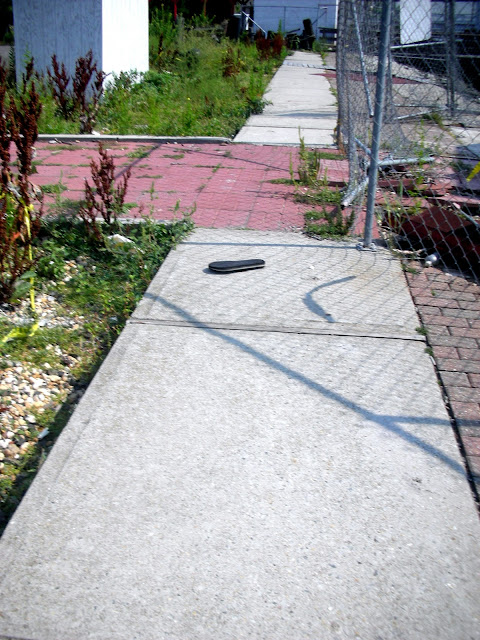 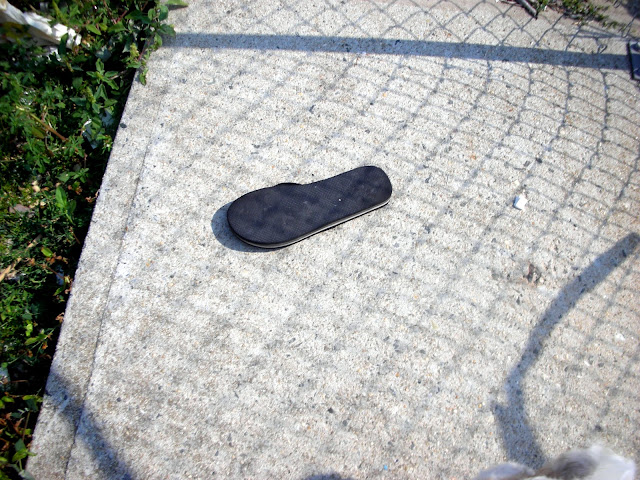 And that's the end of the completion of 23 barefoot miles. (I know the last post said 21, but I wasn't counting some straggler 1/4 miles that with the .4 of this one brought the total up to 23.  But really, does it matter?
Posted by Avocational Singer at 9:52 AM

Nice mix of surfaces! Keep the pics coming; I like to see the old stomping grounds.

I'm planning to post some more pictures on Monday, BFJ. This past weekend I explored (shod) a park that's near my house which I've never explored and have decided it's a great place to run BF. (If this is indeed your "old stomping grounds" you may know this park.) I'm heading out with my camera and Daffodil tomorrow to check it out.

I lived a little farther south in Queens and Brooklyn. I remember a great biking/running path north of GWB on the other side of the river.