I went back to Kung Fu last night after having taken 2 weeks off.  So I was a little stiff this morning, especially in the hamstrings and the abs.  I thought that might make me have a less-than-comfortable run, but I was wrong.  It was great!

As I ran along, setting my feet down softly and picking them up as quickly as I can, the cadence of a Schubert song I was working on this morning -- Auf dem Wasser zu singen -- came to mind.  It was going through my head so I tried to keep pace with what was running through my head.  It was slightly too fast a song, so I had to abandon it to try to just get that rhythm out of my head.  (I'll be posting my work on this song in Frescamari's Practice Room, a blog which represents my singing work, a little later tonight or tomorrow, so check it out if you want to hear.)

Anyway, as I ran along I realized that this mile was feeling darned good. I can feel that my thigh muscles have to get slightly stronger now that I am placing my feet on the sidewalk more elegantly, but based on the way they felt, I don't think that's going to take so long -- this week and next may be enough.

So, bearing that in mind, I started formulating my Fall fitness plan.

I mentioned above that I took two weeks off. I will be able to Kung Fu train this week, and I hope I will work out while I am away next week.  When I get back, I want to start putting a specific focus on Kung Fu.

Here is my plan.

Once I get this established, then I'll make Monday the "long run" day.

I'm sure the details of this little plan are boring to most, but this is my little place where I can state all these things and kind of commit to my plan.

Like all plans, it sounds reasonable in theory, but -- like the plan I made to train for a 1/2 marathon last year that sounded so reasonable -- I'm ready to adapt and be flexible and very patient to go through the plan.  I'm also ready to change the plan if just attempting to do the plan teaches me something.

People Encountered
I met my neighbor walking her baby out on the Boulevard. I had told her about barefoot running and she had been really interested in it (she is an open kind of person). She saw my bare feet and asked if I was out toughening my soles. I told her I was going to start running as soon as I got to the corner. She told me that she had gone out and run a little bit barefoot after we had last talked and really liked it. She said it felt like a great massage on her feet. She told me she had been a serious runner, but had to stop because she had developed aches and pains. I told her I had no aches and pains (in the usual body parts at least -- hips, knees, lower back, hamstrings, etc... ) I think she's going to take it up. I really hope she does.

Blisters
Today, after blasting the bottoms of my feet with the garden hose set on jet setting, I took a look at the bottoms and saw the white skin where what-must-have-been blisters had been located. I had not realized they were there, so they hadn't been painful.

I think -- yes, I am pretty sure -- that they were from the Harlem to Brooklyn Chris McDougall Run last week.  Based on how very hot the asphalt was, and the horrible way my feet felt as I walked through the subways to the party at the end, I would say those blisters must have formed then. I don't think they're from my regular routine. 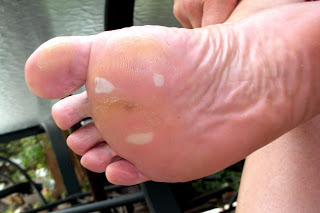 Posted by Avocational Singer at 1:43 PM

Plans are good. They are what keep me running. And races. I love races.