I learned something today!  It is not a good idea for a beginner barefoot runner who is developing her soles and feet to run 2 barefoot miles on the day she is going to walk around for hours with her family at The Great New York State Fair.

I'm still visiting the hometown I grew up in.  I ran my 2 miles this morning before the Fair.  It went so well.  I felt so good during and after.  The asphalt was feeling smoother and softer.

I had, of course, been very aware that I am quite slow. Years ago, when I was something of a distance runner, I had been a steady 10-minute-mile pace all except for one period of time after I had lost 30 pounds and had the surprising experience of my pace switching to 8 minute-miles automatically without having done a thing, trainingwise, to run faster.

Well, gaging how I had always been a slow 10-minutes-mile runner, up to this point I have been "guestimating" that these days I might be doing, say, 14, 15, or 16-minute miles now.  I really honestly could not tell.

Well, now I know.  My first mile was 17 minutes and my second one was 18.  I felt a little discouraged and disappointed about this for about 10 seconds and then I immediately adjusted, because it truly does not matter to me.  I will stick with what I can do for as long as it takes.  I'm not in any hurry.  I'm happy.

So, I figured after resting for the hour it would take to drive over to the fair, I ought to be fine to walk around for six or seven hours.

Well, I'll tell you, it was not easy to walk around the fair.  I felt like I was in some kind of endurance test.  The place we ate at for lunch  was way on the other side of the fair.

At certain points my ankles and arches ached so much thoughts of renting a wheelchair entered my mind.  That would be so ridiculous.  What kind of ambassador for barefoot fitness would I be?  Needing a wheel chair to go around the fair with my family.  No!!!  I wanted to tell everyone who may have caught a glimpse of me limping along that I had run two miles that morning.

Thank heavens we found one of these things: 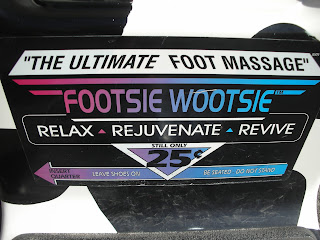 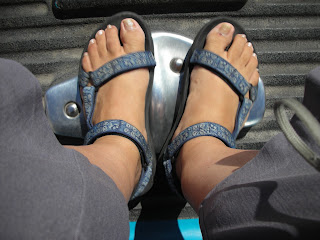 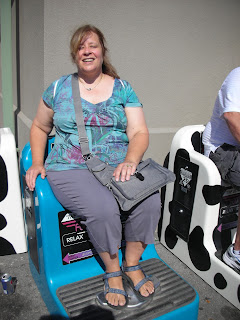 These machines are amazing.  After I got off, it felt like I had a brand new healed pair of feet.  Except that the effect wore off in about 100 steps or so.  Still, it felt really good.  They should have these at certain spots along a marathon or something.  No, never mind -- forget that thought.

I don't know if I'm going to be able to express this well in words or not, but I realized that at my level I was experiencing a kind of endurance test today.  When I wanted to abandon the walking around, find some little place in the shade to sit, and send my family off to do whatever they wanted while I rested my poor feet, all those ultrarunners and endurance athletes who inspire me came to mind.  I thought of the human spirit and it is this will that keeps us going.  I've read people's accounts of running in those long 100-mile races in the heat, or the cold, or the rain.  Surely they get to the point sometimes where they are feeling pain, and putting one foot in front of the other, trying to find the best way to step on their feet so they don't injure themselves like I was now.  I always dream of doing something that requires that kind of endurance some day, but -- well -- maybe I was doing something like what they all were right now!

So, I saw my trekking around the State Fair under these conditions as a kind of endurance event.  One custom-designed for my own level of fitness.  Just like the way it felt trying to walk through the subways to get to the bookstore at the end of the 8 mile run with Chris McDougall.

Something else to bring a similar point home happened.  We were eating dinner across from a booth run by the National Guard.  They had a pushup challenge going on and if the men could do 50 pushups they got this cool Tshirt and if the women could do 25, they would get one.  As we sat there eating dinner, I watched different people come up and take the challenge.   Many of them had really horrible form, not even going through the entire range of motion for a proper push-up, but they got T-shirts anyway because they did the requisite number of push-ups. 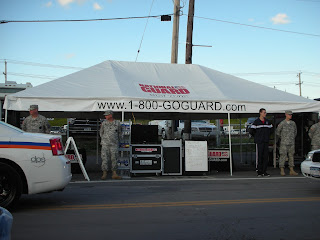 I have been working on pushups in Kung Fu for a while now.  I've had to start with knee push-ups, which I feel, because of my weight, have been as much as a challenge for me as someone lighter tackling the full push-ups.   I have been proud to get to the point where I can do 3 sets of 25.

So, I wondered if they would give me a T-shirt if I could do my 25 knee push-ups.   I felt that I would be sorry if I left the fair without checking it out.

Well, the National Guard guy told me that knee push-ups would not count for the challenge.

Like the way I felt a tiny sting of disappointment in the morning when I learned how slow I really was running, I felt that  little sting again when I found out that my hard-earned 25 knee push-ups don't count for anything in the eyes of the world.

But like the little sting I felt in the morning, it did not last long. Some accomplishments are not for recognition by the world.  They are personal accomplishments and only the one who struggles knows what he/she has done.

I wanted to write about it because there might be other people out there who read this and have these little personal accomplishments and no one will ever know what they go through to endure and achieve the little that they do achieve and I want people like that to know, like me, that it is really significant, even though it may not be worthy of any kind of T-shirt.
Posted by Avocational Singer at 8:51 PM

Re speed, it takes time. Fast and slow are defined by who you compare yourself to. You might think I'm fast, but those high school kids at the front of the pack sure don't.

Re pushups, it's better to have good form on your knees with no shirt than to have bad form with a shirt. Wow, that could be taken way out of context.

I bet marathon sponsors could make out like a bandit if they put those foot machines along the route! Come to think of it, I need one in my house.

Good for you for being happy at your own pace. I have about a 20 minute walk/run mile - lol!