Well, to sum up the little adventure I've been writing about (did you ever know someone could write so much about driving to a park, running a mile and a half, and coming back?  I think I've seen a blog out there called "Talk Less; Run More" or something like that.  Maybe as my mileage increases just that will happen, but in the meantime I'll be running at the mouth,  I guess.) I'll just reflect in this post on how the run went and how my barefoot running issues are coming along.

The information I found about Morton's foot and the pain and grinding I've been feeling up to now in the area of the second metatarsal head definitely was on my mind as I set out to run around that lake.

Besides the information about Morton's foot, at the same time I had been reading some stuff in a book called The Barefoot Book: 50 Great Reasons to Kick Off Your Shoes

, by L. Daniel Howell.  This book was recommended on Jason Robillard's blog, Barefoot Chronicles.  He was having a contest to win a copy of the book (contest is over now), but I just never win these kind of contests, and even before he announced the winner, I just went ahead and ordered a copy of the book because I knew I had to have it in my library.  (Maybe shopping for books about barefoot running is going to fill in the void left behind from the pleasure I used to get shopping for running shoes.  This barefoot running thing is definitely NOT supposed to be about shopping, so I'll have to examine my head a bit on that one.)

Okay, so I was kind of putting all the new information together in my head as I was running around the lake.  For one thing, after my 1.4 mile run last Friday, the following evening and next day I definitely felt those metatarsal heads grinding in to the floor as I walked around my house barefoot.  It felt so weird, like I was just walking on my skeleton. As I felt this I thought, "this just is not going to work out. If I feel like this now, how is it going to feel when I increase any distance or improve my speed at all." But I did console myself with the fact that at least I would always have "The Barefoot Mile" and that I was happy to be just running at all.

But while running around the lake, I had an image in my head of a picture I had seen in The Barefoot Book. I wish I could show you the picture here, but that would be a copyright infringement.  It was a drawing showing the underside of the feet that compared the spot where we push off while walking when barefoot vs. the different point of pushoff when we are shod with shoes that squeeze the big and pinky toes in. It showed how the push-off spot moves from below the big toe over to between the next two toes.

Well, from what I've heard, I'm not supposed to be pushing off while barefoot running. Maybe for walking, but for running I'm supposed to be falling forward kind of.

Yet, all the same, by keeping that spot in mind, I felt a little bit of a change in the way my feet were touching the ground. I did not want to deliberately manipulate myself into another position, but just try to find by feel where it was better to put the stress on the foot.  I definitely had more of a feeling of running on the center of my arches. I was thinking of the arch as being a kind of rainbow in my foot and that the end of the rainbow was not between my second or third toes, but closer to beneath my big toe, if that makes any sense.  This, combined with the feeling of springier bent knees felt much much better.

In fact, it felt so much better, that it almost completely eliminated any reaction in that second metatarsal head spot.  In the evening last night, and now this morning I have none of that bones grinding to the floor feeling when I'm walking barefoot.

Now, here is my latest thinking on this.  I came home and looked at the shape of my feet.  I saw that, indeed, just like it says in The Barefoot Book, my big toes were pointing inward a bit, and my pinky toes were very inward leading, instead of fanning out the way someone who had walked barefoot all their life would be.

I happened to have kept an old pair of those New Balance walking shoes that my life depended on for so long (I wrote about here where I gained lots of weight and stopped ever going barefoot started wearing supportive shoes all the time.)  I wore these shoes for about 16 years up until the last year or so when I switched to running shoes because those old white walking shoes were going to be too clunky for running.

I laid my foot over the New Balance running shoe, and -- sure enough -- the shoe fit!  The sides of my feet, just like illustrated in The Barefoot Book, were shaped exactly like those shoes! 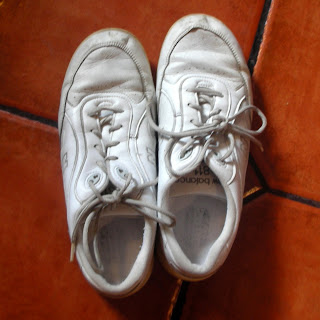 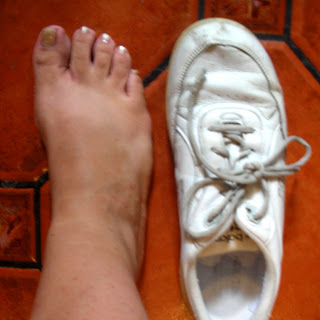 Now what would I think this means? I think it means that over the years while I was wearing these shoes (and shaping my feet to them) I changed my gait. I needed to because since the big toe was leaning in a bit, and the little toe was smushed on the side, the only place left I had to put the load was on that second metatarsal head.

Not only that, but the pain on the outside of the foot makes sense because, needing to roll the foot, I may have rolled too much outside (because the arch in the shoe blocked me from rolling inside).  But since the pinky toe could not take any of the load because it was bent inward and not lined up with the fifth metatarsal properly, the side of the foot got too much stress.

Anyway, when I took off the shoes to barefoot run, this habituated gait has been in action. 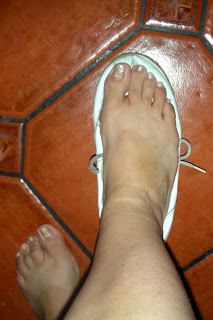 Therefore my diagnosis is that the way my feet conformed to my shoes over the years changed their shape, which caused me to alter my gait.  Now that I'm running barefoot, I believe that over time my feet will correct back toward their original shape more. I think that might happen because this shape-change came after my foot already had developed and I went barefoot a lot as a child.  Maybe it won't.  Maybe the shape change is permanent.

This would be another argument for new barefoot runners to be patient and proceed slowly as these foot adjustments gradually shift. It also demonstrates the usefulness of going round and round on "The Barefoot Mile" in the beginning, because it acts as a training ground where a new runner can work out all these problems before adding speed and distance.  Just like in singing, form has to be in place first.

However, the task while I'm running will now be to gently think of changing the gait back and finding the places where the natural pressures are on the bare foot.  While I'm doing that, I patiently wait for the gradual changes in toe position that will help the gait become more natural again.  It's going to take time for the bones, muscles and ligaments to spread out and get back into a better position again.  This kind of change does not happen over night. It's not like you take your foot out of your shoe and it pops out, springing back to shape like a foam toy that's been stuffed in some one's pocket.  Maybe I'll give those "yoga toes" I've heard about a try.  Hmm, but that would mean more shopping.  Oh, well maybe I'll make my own yoga toes out of an old water balloon or something.

Now! Having done all that reading and thinking, having taken the pictures, and having spent a chunk of time typing all that out and explaining it, I may be completely wrong about all this.  I mean, maybe those shoes were comfortable because they came close to the shape of my foot and that's why I chose them and not the other way around. But, for now, I think this makes a lot of sense.

(By the way, if you're bothered by the way I can't lay out my text and pictures that well, fear not.  Neil Z -- who just ran a 10K barefoot --  had given me a great tip on his blog, Because All the Cook Kids Are Doing It and I hope to download his suggestion today and start using it soon for better management of my blog pictures.  Thanks, Neil Z.)
Posted by Avocational Singer at 9:10 AM