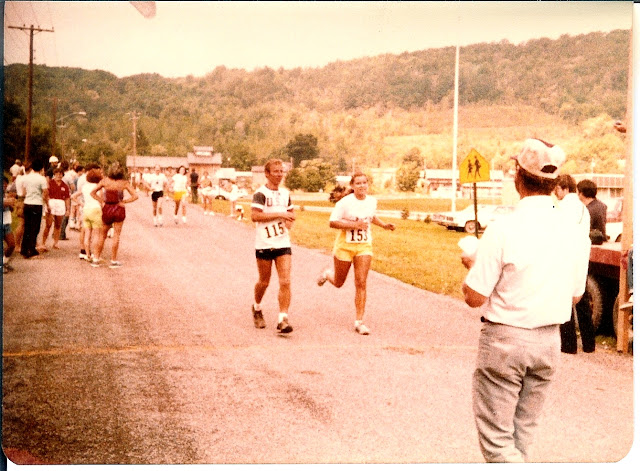 I dug this picture out of my old photo albums.

The weird thing about this race was that I, the girl who had come in last in practically every cross country meet a few years before in high school, came in first place in my age group category that day.  I have a trophy for it in some attic somewhere.  I can't tell you my time, or what race this was.  I wish I had known back then that someday I would want to know.

I never forgot that running I did so long ago, and, as I've mentioned on this blog elsewhere, I would love to return -- get my run back.  That girl in the picture had no idea what was to come.  That she was one day going to gain over 100 pounds.  Wow, if someone had told her she would have freaked out.  That was her worst fear back then, and she probably, in the moment of this picture, figured she was way ahead of the game at preventing her worst fear from ever happening.

Well, I have to tell you that I never, back then, had thought I was very fashionable as a runner.  I think I just wore whatever shorts and T-shirts were in my drawers.

But recently, when Barefoot Neil Z posted his Halloween Howl Race Report, he showed this picture of some runners dressed up like 80s-style runners.  I saw the shorts, the ones with the white trim and the little notches in the sides, and it brought back memories.  Yes, I had shorts like that.  Sure enough, you can see the same style shorts in the photo.

That summer of 1981 was the best running summer, besides this past barefoot summer, I had ever had up to that point.  I had been afraid of running before that.  I would get sick before I went out.  I was afraid of the pain.  I almost fainted before all the cross country races, and I would not push myself at all.  Girls who were stopping for walk breaks were beating me.

But that summer of 1981, I was trying to mend a broken heart.  I decided that the pain of running was easier to take than the pain in my heart, so I just went out running every morning.

One of the best memories I had of it was that we ran out on this country road and down this tree-lined lane to this place where there was a pump that pumped up cool spring water.  We would stop there to get a drink and that water tasted better than any water I've had since.  When I would run out alone, I would always stop at that pump, and I just loved knowing where it was.  But today, I don't think I could find it. I cannot remember where on earth it was.

One day, he got a bunch of his ultra-runner friends to come for a run with us.  We ran and ran and I never felt tired.  We ran out to some diner in the middle of no-where and we sat down for this amazing pancake breakfast with lots of good food.  When we were done we got up and ran home.

At a certain point, my ultra-running buddy told me about the 10K and said I should run it.  So I signed up and then I did.  It must have been at the end of the summer, before I had to head back to college.  I tried to keep my running up on campus, but it was spotty from thereafter, and eventually died away.

The run with Chris McDougall this past summer from Harlem to Brooklyn reminded me of the kind of running experiences I had that summer. In fact, when I spoke with the author as he signed my book, I told him about this memory that I'm writing about here.  I got kind of choked up and got tears in my eyes.  I didn't expect that to happen, but thank God he was very kind.  He seemed to understand.

Well, anyway, that's the kind of running I want to do.  And barefoot running is my way to get back to that place.  I have a long road ahead of me.  I have to be patient. I've got to lose some weight.  I have to keep at it and the progress is slow.  But I'm going to try to continue to chronicle this little dream I have on this blog.  As I go along, I hope you'll stay reading about the adventure with me.  It might take a long time, but I just want to get back there.
Posted by Avocational Singer at 7:19 PM

You are already there. You have already rekindled the love you had. The rest: distances, speed, endurance will come too.
Thanks on taking us on your journey.
Happy Halloween.

This is a beautiful post. Looking back at the things that you loved, and able to look forward to the things you will love again.

Thank you, Julie! How did your race go? Guess I'd better go check your blog.