With the 2.25 barefoot miles I ran today, I am now ready for my race on Saturday – the HoBooken Scary Scurry 5K

It’s been in the 70s this week, so I still don’t have to use any kind of shoes yet.  However I have heard that the temperature is dropping tonight and it will be cooler.  I very much would like to keep my plan to try the race barefoot, so if it’s a little cold I’ll have to deal with it.

Today was beautiful, though.  I decided to use my shadow as a tool to see if my head was staying steady as I ran: 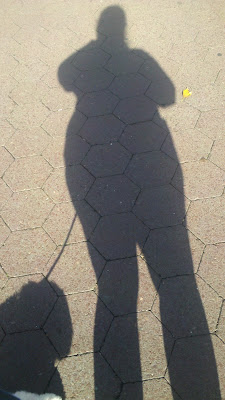 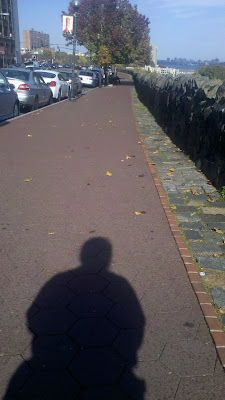 Got to see the foliage: 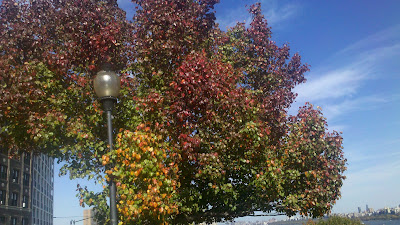 I know these pictures might be a little boring, but I’m kind of experimenting with the camera on my Droid and uploading to Picasa AND using the Picasa add-on for Windows LiveWriter.  Bear with me because it takes me a long time to figure everything out.  I like the way the Droid pictures come out.

After that I headed over to Fleet Feet in Hoboken to pick up my race pack, T-shirt, and number. I had received an e-mail saying that the T-shirts were first come, first serve.  One of the perks of being a mom-at-home is that I can beat the crowds to this type of thing.  There were only two people in the store when I got there, and boxes and boxes of new T-shirts on the floor. 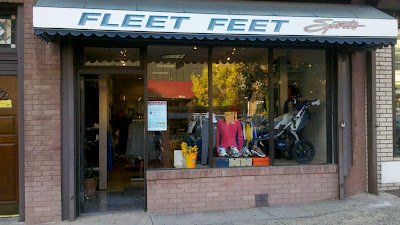 To prove I was there: 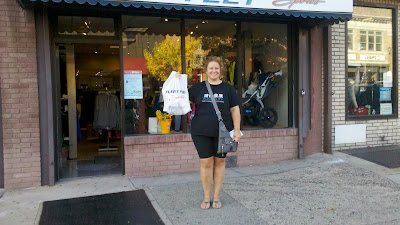 Last summer I had joined the No Boundaries running club there and trained for a 5K in the summer with them.  (To read about that a little bit, you’ll have to go to my Avocational Singer blog to the post “Being True To One’s Self”)  I had done that as part of training for what I thought would be a half-marathon, but which ended up with the disastrous horrible case of plantar fasciitis.

Inside the store was the coach from the running club.  He remembered my name, and asked how my running was going.  I had to update him about the plantar fasciitis, and, of course, tell him that I’ve started to run barefoot.  It was a little weird talking about this with all the shoes hanging on the walls around me.  I have to admit, from force of habit, my eyes went over to gaze at all the pretty running shoes gleaming and sparkling on their little shelves.

The coach was very interested, and got me talking a bit about it. I ended up giving him the address to my blog and it’s possible he’ll check it out.

I asked if they would be carrying any minimal-type shoes at any point.  He told me they would be getting a few in for the Spring.  “But I need them for winter to keep my feet from getting cold.”  He said they would be there in January.  I guess “Spring” in the running shoe business means January.

He said they would carry the Nike Free (but … but, technically that one is not considered minimal, but merely reduced), and the Minimus by New Balance. He mentioned one more shoe whose name I did not recognize.

I really like them in there.  I’ve always liked this little Fleet Feet store.  There is a real community feeling in there.  But I don’t think I can wait until January to find something to wear in the winter.  I had been planning to wear my Vibrams, but I have heard that they are not that warm (in that case, why not just be barefoot?) and that they slip on wet surfaces.  I will give the Vibrams a try at least, and not go merely by hear-say, but I think that’s probably going to be right.

The last thing to show you is the bag of stuff I got.  This is a fun part of races is getting a bag of stuff.  I have looked at so many bags of stuff on other blogs, and it’s really dumb, I guess, but for some reason getting the stuff is part of it and I had to take a picture. 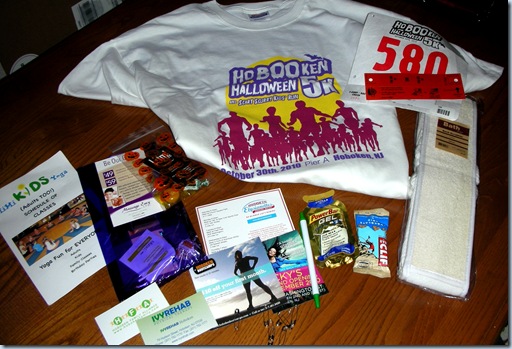 The long thing over on the right is a bed-and-bath item – a back scrubber!  Some runner fuel stuff – stuff I don’t need yet because I don’t run that far.  A pen!  Coupons.

When I saw the race tag, I realized that I’m going to have to do what every barefoot runner has to do at one point or another once he/she starts entering races – figure out how to attach that tag to my feet.  As I’ve read other blogs, I’ve kind of skimmed over that part and not paid 100% attention.  Barefoot Angie Bee has an adorable way of tying the tag on, but I’m not sure I can figure it out.  I’d probably tie it too tight and be uncomfortable the whole way.

BTW, when I saw the Nuun rack sitting on the counter, I thought of Barefoot Angie Bee (because she is a Nuun rep and that’s where I first heard of it.)  Seeing the rack made me feel  like she was there or something, and the store owner saw me look at the Nuun, and I said, like a an excited kid, “That’s Nuun!”  And he was like, “yes … it makes an electrolyte drink.”  But that’s not what I meant. I wanted to say that someone I knew was a rep for that, but then I realized that I didn’t know her, actually.  It’s hard to explain how you feel like you know someone when you read her blog.

One last thing.  In my bag-of-stuff there was a little postcard for the women’s running club that is hosting the event, the Hoboken Elysianettes Running Society: No Runner Left Behind.  The post card advertises their second annual New Member Run and encourages women to come out. HERS has a “no runner left behind” policy and will match new runners with people running similar distances or paces.  I kind of longingly looked over their schedule. It would be nice to be in a club and have some other women to run with.  But then I remember that even if I joined, I would not really be running with them all. That’s the frustrating thing about being so slow.  Even when I meet new runners who say, “I’m slow,” they are usually faster than I am.  I think I cannot join a running club until I can run at least a 12-minute mile.  That won’t be for a while.

Posted by Avocational Singer at 8:19 PM

For colder weather, you could try the Sockwa Amphibians (www.sockwa.com)
I have just ordered a pair and am not quite sure how they would fare in the snow, but I think you could wear socks with them and the sole looks pretty non-slip to me. Good luck!

I can't really recomment much shoe-wise. You might be able to check out the Nike Free 3.0 - I think that's about as minimalist as that line gets (I like the free for walking around in, and I have done some running in it, but profile wise it's not the slimest, so you it's not really barefoot like in that sense. Still if someone is planning on slowly moving from a regular shoe to a less supportive shoe, it is beneficial, I think. Anyway.) Maybe a racing flat? They have less support than a regular shoe - basically they are built to be light so people can run faster, but have less support than a regular shoe. Not sure about how long they would last though, since I'm not sure if they are designed for every day (or multiple days per week) use. The other minimalist shoe I know about (but haven't tried) is the Saucony Kinvara (I think that's what it's called?). I've heard good things about it though. Not sure how your local place is, but I know that here, I can buy shoes and take them for a run, and if I really dislike them I can bring them back. I think the assumption is that you don't totally wreak them on your run though (as in they assume you aren't going to run trails in the rain in new shoes and try to return them the next day). Anyway, that might be helpful if you aren't sure what to try.

Oh and there is the Ecco Biom. Not sure about that one since I haven't seen it around here before, just in some magazines and online. I think the rubber sole part, actually encompasses part of the heel, so the heel looks higher than it actually is. I could be wrong though. Anyway, good luck!

You just have to find the right running club. We have Godiva down here which has runners of all speeds, and the club races are more about participation than competition.

It seems like the clubs based out of the shoe stores are less friendly, and have a lot young kids trying to impress each other.

I am impressed at how thought out you are for this, and how much you plan ahead. Wish I could get my race packet early, but it's about a 3 hour round trip.

Babymama and Lauren, thanks for the names to check out. Since I wrote that post this morning, I read Jason Robillard's review of the Terra Plana Vivobarefoot Evo II which sounds pretty appealing, although I think they are expensive. Terra Plana has a store in Manhattan (which I visited once) so I might go over there and check them out.

ac -- You are right, of course. The idea is to just keep running, and all the other things will materialize in due course. At some point the right group will be there.

julie -- I definitely would not be taking a 3-hour round trip to pick up a race packet. I'd have to wait until the morning of in that case! It was very convenient for me to stop by Fleet Feet yesterday.

Runners World Barefoot forum had some extensive discussions about minimalist shoes.
Which droid phone/camera did you get? In the next couple of months I will have to decide droid or iphone. The camera is a major issue for me as I don't want to carry two devices on my runs.

Ewa -- I've got the Droid 2. It has a 5 megapixel camera and as you can see the pictures come out pretty well. I still bring along my other camera sometimes. I took the pictures of my spontaneous run the other day with the Droid. I'm still getting used to the phone so I can't say whether I'm wild about it or not yet. The battery runs out fast.

For the time chip, a strip of velcro does the trick. I've used zip-ties in a pinch. You could probably use duct tape, but that might not be the fashion statement you wish to make.

Re shoes, don't forget to check out duane reade for aqua socks (they might not be carrying them this time of year, however). If the cheapo stuff fits, they work just as well as the "specialized" shoes, I think.