No Run For Me Today – Minor Surgery Instead! 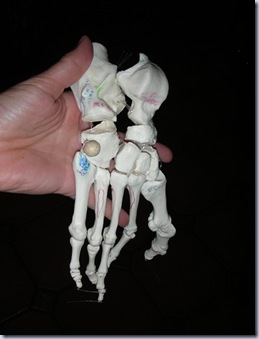 I woke up today with more pain in the 1st metatarsal phalangeal joint.  Of course when I woke up I had no idea that was the name of the joint.  But in trying to figure out if I should go for my run with this pain or not, I had to try to Google what was wrong with me.  In order to Google what was wrong with me, I had to have some words to Google.  So, I got my husband’s medical foot bone model out and showed him where it hurt and asked him what that was called.

I got myself really scared and worried because when you Google “1st metatarsal phalangeal joint injury” a lot of upsetting stuff comes up.  I was thoroughly convinced that this was a repeat of the horrible and disappointing plantar fasciitis scenario that I faced last year when I had to stop running.

Worst of all, much of the treatment of this condition involved -- like plantar fasciitis -- orthotics, rest, wearing shoes with stiff supportive bottoms! (Lions and tigers and bears – oh my!)

I was planning a big blog post where I was going to rant and rave about how the whole idea of getting fit and running and enjoying that was all a big farce and illusion, etc….

But the more I thought about it, the more I began to think that it was not my barefoot running that caused the supposed injury. I decided that I had injured it while doing Kung Fu in my vibrams.  I hadn’t told you all about this, but the past two Kung Fu classes I had decided to try my vibrams instead of the beat up old pair of running shoes I’ve been using.  I loved doing Kung Fu in my vibrams, but as I researched this “turf toe” condition, the more I became convinced that twisting and turning from stance to stance in a minimally supportive shoe injured the joint.

Then, right in the middle of all this research and self-diagnosis, my DH came home.

“Wait a minute!” he said.  “Let’s take a closer look at that before you get all doom and gloom about this.” (or something like that).

He took out some kind of doctor-tool and pressed on different spots, including the spot that he had thought was a blood blister and which I had thought was an embedded object (which I wrote about yesterday).

There was an object in the foot at that spot.  Could it be?  Could it be that I do not have “turf toe” after all and that it might be this thing in my foot?  My hope began to come back. 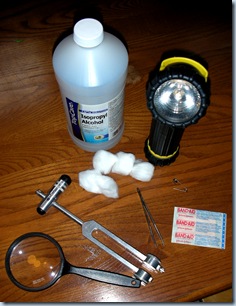 My DH performed the procedure to get the thing out.

I feel bad putting him to work like this for my barefoot habit.  He already had to get a splinter out of my big toe a couple of weeks ago, and now he had to do this.

I was beginning to wonder if my barefoot running was too cumbersome.

The pain in the joint area improved considerably once the object had been removed.

What was it?  A pebble? (That’s what it felt like.)  DH said it was hard to tell but it seemed to be a piece of wood.

So, I did not go for my run today, and I’m going to take tomorrow off too.  Everything feels much better without the object in there, but there is a little residual soreness, and DH said that it is possible I do have a strain (not sprain, strain) of that joint as well.  I do feel like there might be a slight strain in the joint too but I am hoping for the best.

This all means, of course, that I am definitely not going to be running my 100th barefoot mile at the 1st Annual NYC Barefoot Run on Sunday.  But I shall still probably be able to run two times around the course that day.

And do you know what I say to that?  The same thing “Barefoot Josh” advised in his comments the other day: 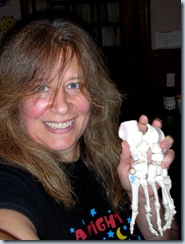 Posted by Avocational Singer at 8:33 PM

ack ack ack!! Well... I'm glad you can still participate in the race and that it was nothing too serious. Heal quickly!

This may sound weird, but your post made me laugh. I can totally relate to the "doom and gloom" sentiments right before you find out that it's not that bad.

Sorry you won't be able to run your 100th mile at the race. But you get to be in the race, how cool is that?!

Julie, I'm glad it made you laugh. It should! That's why I put the funny picture at the end. I'm making fun of my own "doom and gloom" sentiments even as I have them!