The plan for today: Run the HoBooken 5K course to practice for Saturday.

I don't know if you were paying attention or remember, but I wanted to go back and run the 5K course and run on the road as much as I could to see how things felt.  I had thought I might go back without Daffodil, my dog, because it was dangerous in the road with all the traffic.

Well, I couldn't do it.  I couldn't leave little Daffy behind.  She has been as consistent and regular as I have been this summer and she really gets hyper when she misses a run.  That last time she was out with me was last Wednesday, and she got really barky and bossy the past couple of days.  We thought she drank some coffee by accident she was so hyper (That happened once and it took forever for her to calm down, and now she loves coffee and tries to get some every chance she gets.  It has taken a lot of discipline to make sure I'm not leaving my cup in places she can access.)

But I realized now why she's been so hyper.  If I don't take her out for her exercise, she doesn't get it.  No one else in the family will do it.  I didn't bring her on my spontaneous run the other day, so she missed a day and needed to get out.

How could I deprive her of this adventure?

I arrived at the scene of the upcoming race and got myself going.  I didn't run it from start to finish.  It's an out-and-back kind of race, so I started in the middle and ran to the start and then to the other end and then by the middle again.  I ran some extra because there were some streets blocked off.  Not too much extra.  It ended up being about 3.5 miles altogether.

This is the very first time I have actually gone for a practice run ahead of time on a race course. It often happens that something obvious doesn't hit me for a long long time.  Everything felt really good.  I was very happy that there were some spots I could get my feet on the road without endangering Daffodil.  There was a row of parking spaces that went on long enough to get my feet used to it: 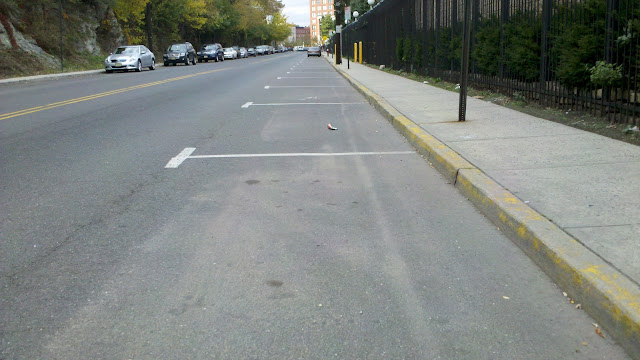 There were also some of the blocked off roads with lengths of the asphalt that were helpful to the task. 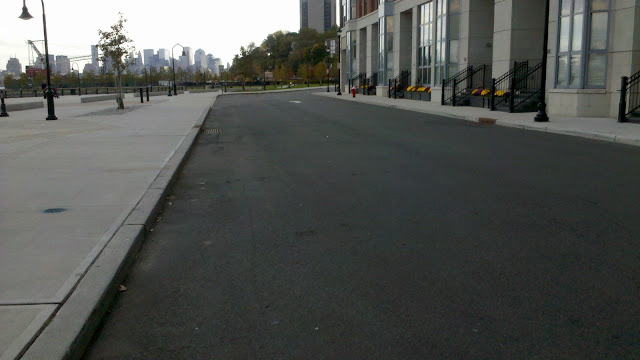 I felt absolutely fantastic.  My feet felt great.  I pretty much take exactly one mile to get warmed up and get in my groove.  I now know that this is going to work, and I will truly be able to accomplish this 5K barefoot. It's hard to believe that when I signed up for this way back in July that I wondered if I would be able to run a 5K by October and now it will be my second one! (BTW, the friend mentioned in that post back in July ended up not training for the race and will not be running it.  So, I'm on my own.  I've asked my husband to come over and take pictures for my blog, and he's agreed to come.  That will be nice.)

I'm not going to mention to the race organizers ahead of time that I'm running it barefoot.  I don't want to jinx it. Maybe I'm paranoid, but it seems to me that if they have time to think about it they might tell me I can't do it. They have a Facebook page and they are sending out status updates about the race, and I keep holding back from making a comment about running it barefoot. I think the best way to do it is to just show up and do it, like I did for the last race. Of course anyone could just find out from reading this blog!

Here's the view I had on the way back that made it so easy to finish up: 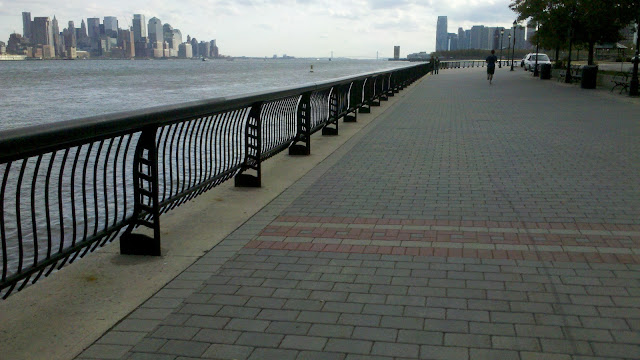 I finished the whole thing in about an hour.  That was 3.5 miles in an hour.  Yes you heard that right.  But it might have been less because 1) I did not really check the exact time when I started and estimated it was 3:30, 2) I walked for about five minutes before I started, 3) I stopped a few times to take pictures.  So, maybe it was less time. I finished right at 4:30.

Now the only thing left is to do a couple of light runs later this week, and then have a lot of fun on Saturday.
Posted by Avocational Singer at 8:42 PM

You are really getting some good momentum with barefoot running. Look at the races and the miles already! Looking forward to your race report.